Characteristics and advantages of Hydrostop

What can Hydrostop do and why buy it? 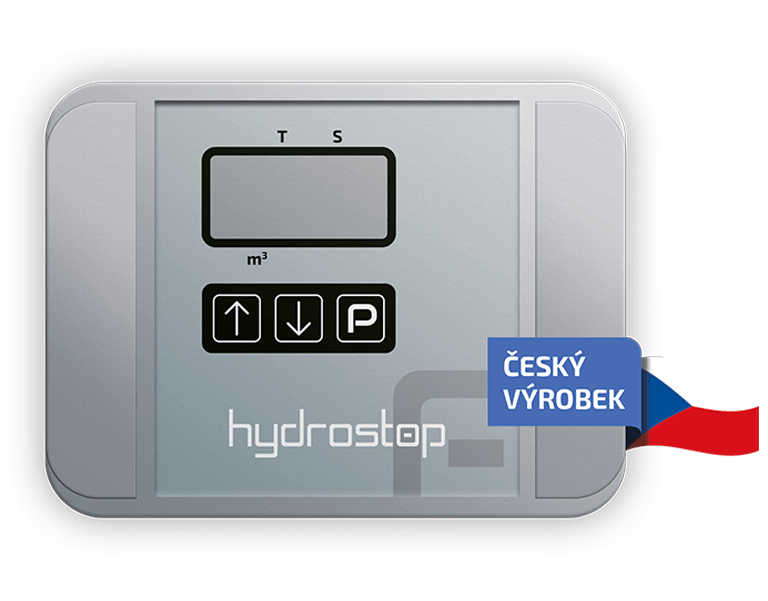 It protects your property nonstop against flooding.

It detects hidden water leaks that you do not know about but that you pay for.

It can communicate with your ESS (Electronic Security System).

It records the water consumption in your premises and allows reporting the data.

It immediately informs you visually about closing the water main, and warns you acoustically.

It can be controlled remotely by using Wi-Fi and its own original application for a PC.

Where is Hydrostop suitable?

What types of property can it protect?

Hydrostop is suitable for most new buildings or older houses. The ideal installation place is in the utility room, the water pipe shaft, or in the area of the cellar. It is dust and water resistant with the IP protection class of IP65. Just one installation is enough to protect a house.

Hydrostop can be placed in flats which have separate hot and cold water inlets. One installation is able to protect both of the inlets together and can be used for several flats at the same time. The most appropriate variety is to use an individual Hydrostop for each of the flats.

Even larger commercial buildings can be protected by just one installation. Special unique functions (e.g. resetting the run-through water amount to zero, or detecting the targeted consumption) significantly reduce the potential amount of water leakage in case of an accident.

Installations into public buildings are similar to commercial premises. An additional installation of other Hydrostops is possible to increase the protection of individual archives, scientific workplaces, laboratories, or other premises.

Customer reviews What do our customers say about Hydrostop?
A Damaged Ice-maker

I would like to thank HODRtechnic for installing Hydrostop. Not even three months later, I got “the return on my investment”. In the food storeroom (where the freezer and the fridge are also placed), the ice maker float was damaged. The water was refilled constantly, it could not flow off to the drain, and it started to flood the whole room. It happened during a Saturday night. Normally the leak would not have been noticed until Monday. Thanks to Hydrostop I was protected in two ways. I did not have to pay for several cubic metres of unnecessary water leakage. And the food and equipment were protected as well. If the food and furniture has been damaged, the loss could have reached of thousands EURO.

We own a low-energy wooden house. We were not only afraid of fire, but also of flooding. We have personal experience in flooding; it happened when the WC pipe cracked. Fortunately, we were at home when it happened, so the damage and loss were minimal. After this had happened, we wanted to prevent potential flooding and searched for an affordable and simple installation which would minimize the risks. We found Hydrostop on the Internet. We are a green family. By using the water savers and setting low protection limits, Hydrostop has taught us how to manage water consumption more economically. We are also sure that our house will always stay dry, even if we are not at home.

I always told myself that flooding would never happen to me. But the reality was completely different. I live on the first floor in a block of flats, so I have neighbours downstairs. As on a normal working day, I went to work. While I was at work, the old water faucet inlet pipe of my sink cracked. As my neighbours downstairs were not at home, the water leakage went unnoticed. When I came home, I saw the scene of destruction. The water had been running for about 6 hours. The worst thing was making a call to my neighbours.

It took several days to clean the flat. My flat was insured, but I was the one who had to cover the costs of the work and for the run-through water consumption. After having searched the Internet for some time, I found the Hydrostop device and bought it. Now I can go to work without worrying.

I installed Hydrostop after having a bad experience with a garden hose. I was watering the garden one summer before going on holiday. I put the hose aside, and closed the inlet valve in a hurry. Because we were in a rush, my wife and I forgot to close the water main. We always close the water main when we leave the house for a longer time. We were away from the house for a week, and nobody was available to check our house. After returning home, I found out that in addition to the opened water main, I had forgotten to close the garden hose valve properly. About 50 cubic metres of potable water had run through during the week at a rather low flow rate. I had to pay for the water. Fortunately, nothing was badly damaged. I had been in a hurry at that time, and made a mistake which I had to pay for.

In January more than 10 years ago, my unfinished new family house was completely flooded. Because of poor assembly, the brass flange of the water distribution in the bathroom cracked. The bathroom is situated on the first floor. The water was running at the full flow rate for the whole night. 10,000 litres of water ran through within 12 hours. The damage incurred was 25 000 EUR, and that does not include the higher costs for heating, drying, and many hours of work and stress. Anyone who has experienced this kind of event never wants to go through it again. My house was not protected by Hydrostop at that time; now it is protected by it so I am no longer afraid of any floods, and I can sleep well.